Making it all Work: Field Hockey and XC, by Braetan Peters 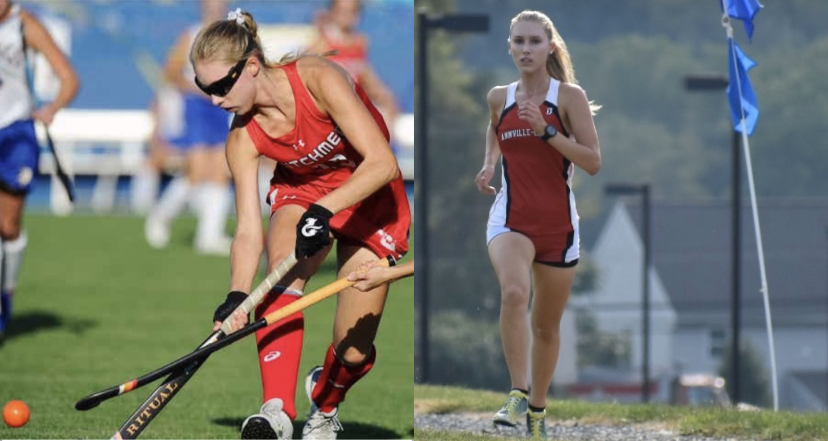 Hello everyone! I am excited that you are following me along on this journey and my final year as a high school athlete. In this article, I am going to share about my experience as a dual sport athlete and how that experience has shaped who I am.

Running has always been in my life ever since I can remember. My mother is an ultra marathon runner and my dad was a triathlete, so early on, I would do the fun run events at the end of their races or run through the finish line with them. Watching my mom participate in these races influenced me and drew me towards running. Running wasn’t the only sport my mom was good at, she also played field hockey at Warwick in high school where her team won State Champs and then she continued to play in college. Her field hockey experiences were so positive and fun that she persuaded me to try it, which is how I fell in love with the sport.

Kindergarten is where I first started to play both sports. I signed up for Annville’s youth track and field program in the spring and then in the fall, I participated in Lancaster Mennonite’s youth field hockey league. I continued both sports throughout elementary school and then in fifth grade, I joined Palmyra’s cross country league for their unofficial youth practices. I was able to continue these different programs with other schools and clubs until seventh grade when I began Junior High sports at Annville.

Participating in two fall sports was rare in Junior High, but I still was passionate about playing field hockey and running cross country. It was definitely an adjustment starting at a new school (sixth grade is still at the elementary school for Annville) and having more schedule conflicts than ever between the field hockey games and meets for cross country. At this point in my life I loved each sport equally and didn’t have a favorite, although whenever a field hockey game and cross country overlapped, I chose to run.

Trying to balance both sports in High School was definitely a different experience than in Middle School. There were different coaches, the teams were more serious and competitive, and again there were more schedule conflicts. I had to make sure I was communicating with both coaches and planning ahead, so that I wouldn’t get overwhelmed. I headed into the fall season of ninth grade thinking that everything was going to work out perfectly. Preseason had gone well for both sports and I was excited for my first field hockey scrimmage at Solanco. I am a forward in field hockey, so my job is to score goals. During a scoring opportunity, the goalie’s helmet collided with my head, giving me a concussion and a cut on my head that required stitches. The concussion took me out for most of the season in both sports, but after passing the ‘return to play’ protocol, I was able to get back and play the last few games and run in a couple meets. In tenth grade I was able to participate in both sports again, but suffered an overuse injury with my knee (no gashing head wound this time lol). The injury took me out for several weeks, but I slowly healed and regained strength to participate for the majority of the season. At the end of cross country season, I looked back and realized that I was doing way too much conditioning. I was running my XC workouts hard on my own before school and then putting 100% effort into conditioning with field hockey after school (I practiced with field hockey all the time and only ran the XC meets). I had to reassess and communicate with both coaches that we had to readjust how much I was conditioning. The adjustment definitely helped, because I was able to stay injury free my junior year. I plan on using the same strategy my senior season.

Over the course of my career as a dual athlete I have learned so much, but I want to point out something that I think is the key to success. Communication, period. It is critical that everyone recognizes the importance of communication. Competing in two sports presented several schedule conflicts and overlapping of events, so it was my responsibility as an athlete to talk to both coaches and make sure they were on the same page. There were times where I would run in a XC meet and then leave to drive to a field hockey game. It was challenging to make it all work, but advanced communication and planning were key to making it all work.

I know this was a long article, but I hope you got a bit more of an insight into my life. I can’t wait to share more with you guys!